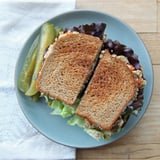 Friends‘ decade-long run gave us many memorable Thanksgiving moments – Monica’s turkey hat, Rachel’s beefy English trifle, the one where Chandler spends Thanksgiving in a shipping crate – but Ross’s tantrum over the loss of his Thanksgiving leftovers sandwich arguably tops them all.

As you might remember, this innovation of Monica’s – a Thanksgiving leftovers sandwich made with a gravy-soaked piece of bread – is “the only good thing going on in” Ross’s life. It is so tasty that when Ross’s boss steals it from the office fridge, Ross has a meltdown of truly epic proportions.

Image Source: NBC
Curious, we re-created this iconic take on Thanksgiving leftovers to see if it is truly meltdown-worthy. Aside from the gravy-soaked bread center, the makings of this sandwich are sort of vague, so we took some liberties. Since it’s a Thanksgiving leftovers sandwich, layers of turkey, stuffing, and cranberry sauce seemed natural, as did traditional sandwich fixings like a bit of mayo and lettuce.

All in all, it’s a very big, very messy, carb-centric sandwich. If you’re a fan of french-fry-stuffed Pittsburgh sandwiches, we’d wager you’ll be a fan. If, like us, you find carbs on carbs to be a bit overwhelming, it’s likely more of a novelty than your new favorite way to eat leftover turkey and gravy.

Full (shameful) disclosure: like Ross’s boss, we found it to be “quite large” and “had to throw some of it away.” Unless you have a big appetite, we suggest splitting it with a friend.

The amounts of ingredients are approximate; adjust to taste and the size of bread you’re using.