This Dog Drops His Ball on the Sidewalk So Someone Will Play With Him, and Hey, I'm Available 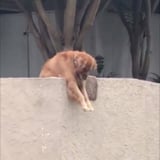 This good wall-doggo dropped his ballo but fear not I returned it to him and thanked him for his service pic.twitter.com/ybsVME5xCp

Riley, a sweet Golden Retriever from California, always has one thing on his mind: fetch. But rather than sit around and whine for his humans to throw the ball for him, he’s been enlisting the help of random strangers walking by his house. In a tweet that’s making its rounds on social media, a man named Johnny Berchtold caught Riley’s strategic play on camera.

“Dropping the ball works almost 100 percent of the time,” Riley’s owner, Wendy Walden, told The Dodo. “Sometimes he misses his mark (not all people love dogs), but then we would always find the ball sitting on the wall because someone picked it up.”

By all accounts, Riley doesn’t have to try that hard to get a little attention. Most people, including Johnny, popped over for a visit willingly. “I saw Riley across the street and obviously freaked out because of how strikingly cute the sight was,” he said. “I had to capture it in that moment, and that’s when I realized he had a toy in his mouth. He dropped the ball over the wall, and the video cuts out because I had to return the ball – he was looking right at me!”

Despite the fact that Johnny was well aware he was getting played, it doesn’t seem to bother him one bit. “After I returned the ball, I shook his paw and rubbed his head, and he seemed to thoroughly enjoy the attention, which is when I realized that it was just a cute scheme to get said attention.”