What's the Difference Between Champagne and Prosecco? 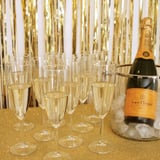 Whether you’re ringing in the new year or just toasting to a Friday, there’s always a reason to say “cheers” with Champagne. Of course, not all sparkling wine is classified as Champagne – and that’s just the start of the confusing jargon. To help you choose a standout bottle of bubbly, we’ve put together a guide to all of the relevant vocab, so you can sort out the doux from the cru.

How to Make Veggie Noodles